The Tower at PNC Plaza was designed to be the greenest office tower in the world. Yet none of the wonders of this LEED Platinum building were going to be visible to its occupants or passersby on the surrounding Pittsburgh streets. PNC looked to my team at ESI Design to change that.

We designed The Beacon, a data-and-light media installation that soars more than 24-feet through the atrium lobby, with each of its 32 levels representing a floor of the tower. The Beacon interprets data from the building’s advanced green systems and the external environment. Then, using 1,584 liquid-crystal polycarbonate panels, each backed with a grid of low-resolution LEDs, it translates this data into ever-changing patterns of light, color and sound.

As the Interaction Design Lead, my role was to unpack the wealth of data generated from the building sensors into digestible stories to be animated on the Beacon. I first developed data tools that could pull data out of the prototype building to find the most compelling data points and distill trends from the data. During Design Development, I created high fidelity wireframes to work with the Visual Designers to translate into photoshop comps and code-driven animations for client review.

During Production, I worked with the Software Developer to design and fully spec the pre-visualization software to advance our data visualizations on both a 3D model of the Beacon and a mock-up of the bottom portion of the sculpture. See our prototypes.

I also designed a responsive, educational web app that reported real-time data points and modes of the Beacon for visitors in the space to further understand the building. For the web app design, I developed paper prototypes and production wireframes for every template, specified the WordPress back-end structure, designed the API from the building that would power the web app, and worked with the Software Developer to ensure the product was built according to spec. Check out the PNC Beacon web app.

MSNBC: The Greenest Building on Earth Has a Brain

Slate: Nine Innovations Designed to Improve Our Work Lives in 2015 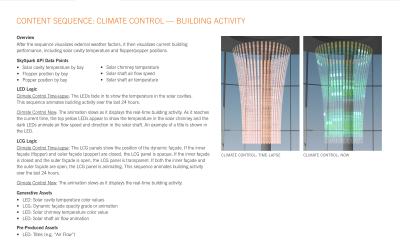 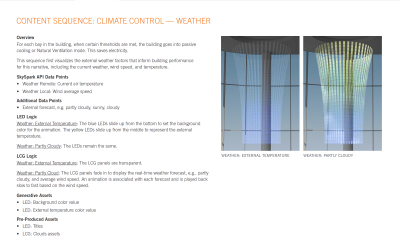 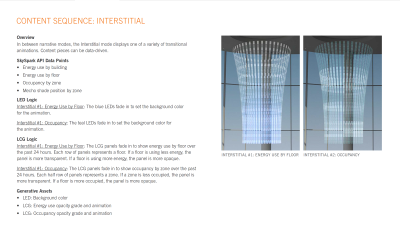 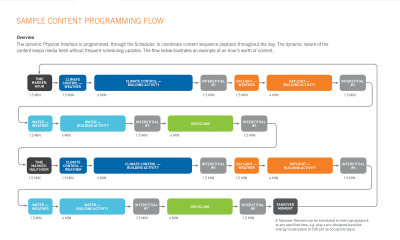 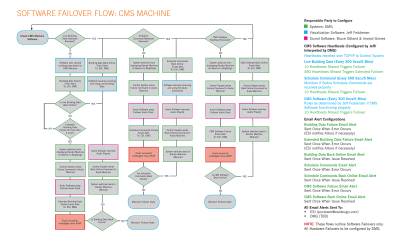 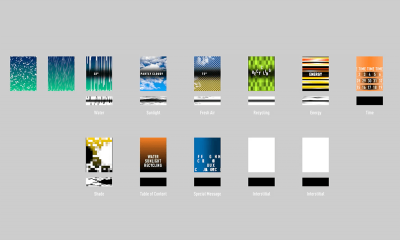 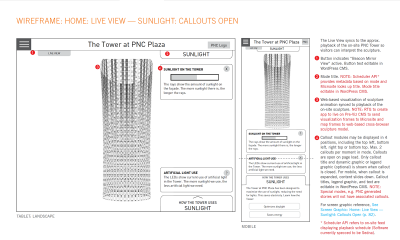 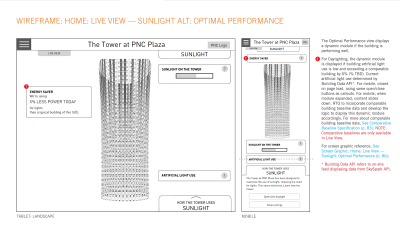 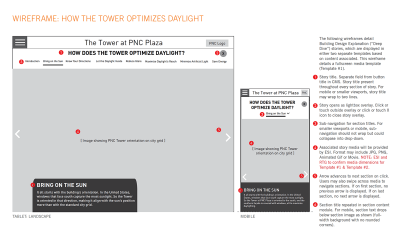 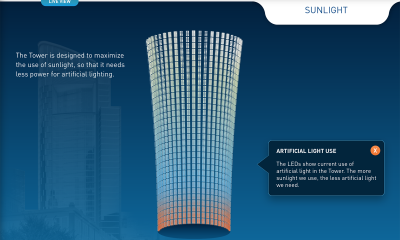 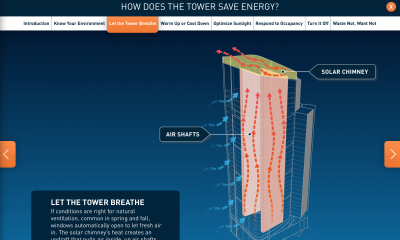 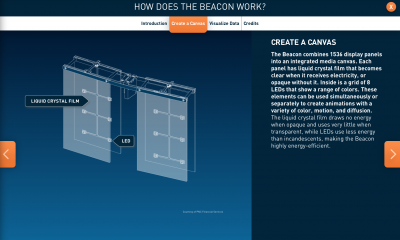 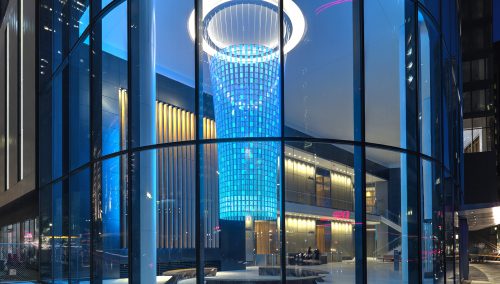 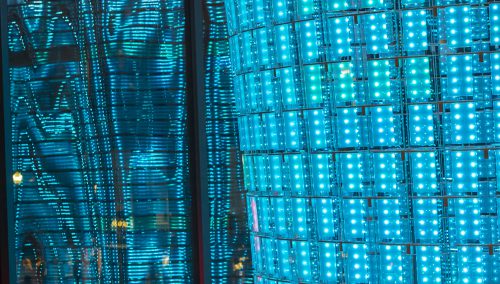 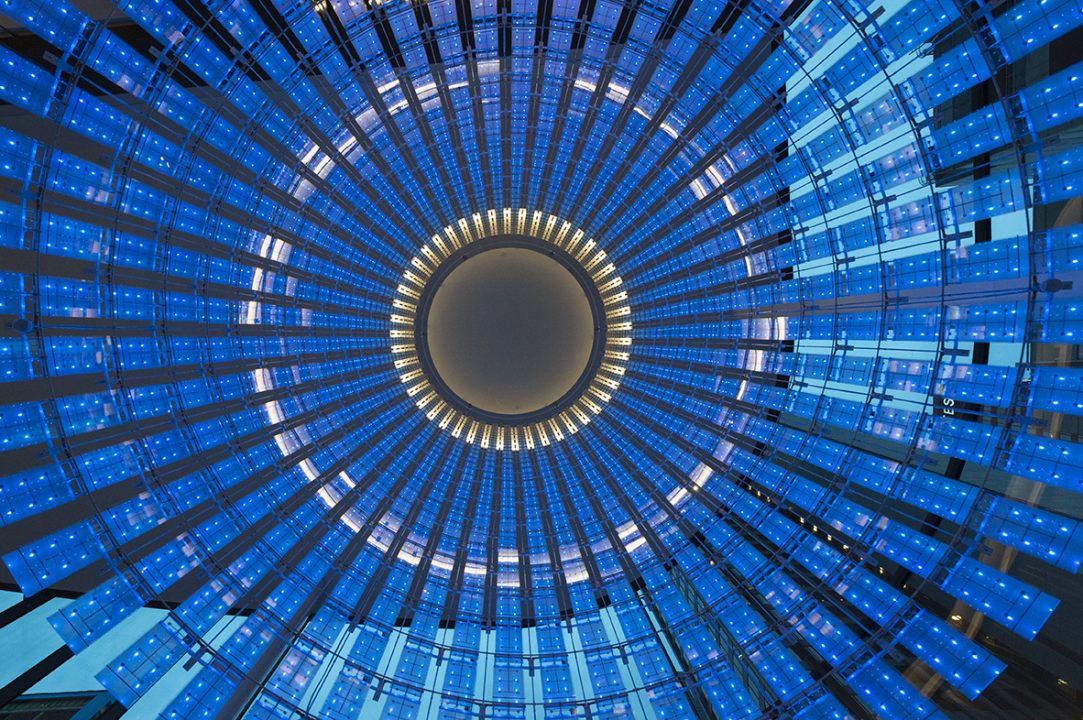 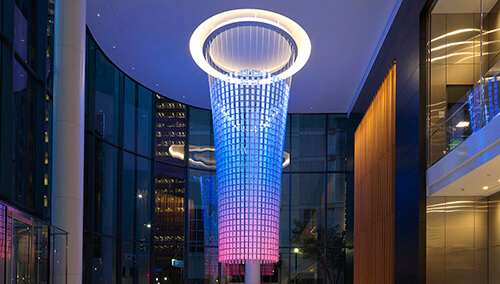 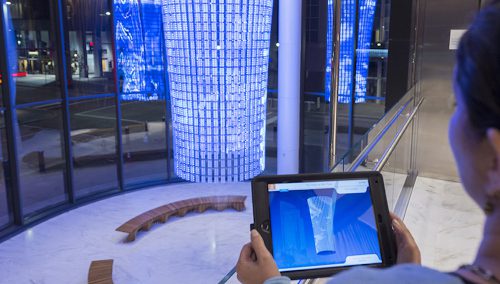 The Beacon at PNC Tower